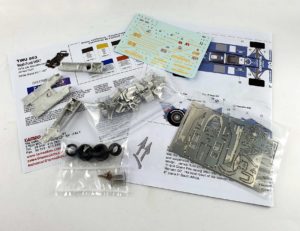 The new THIS WAY UP kit is now available:

The Wolf WR7 was a Formula 1 car that ran in the 1979 season. Driven by a traditional Ford Cosworth DFV engine it was conceived by Harvey Postlethwaite, previously responsible for the Hesketh 308 with which James Hunt won the first race of his Formula 1 career. Just Hunt used the WR7 at the beginning of that championship, before leaving the Circus after the Monaco Grand Prix. He was replaced by a future world champion, Keke Rosberg, without winning points. The car was then evolved into three other WR8, WR9, WR 8/9 models without however achieving world results. At the end of the season the team closed its doors and the car, with its various versions, was in fact reused by the Scuderia Fittipaldi under the name of F7 in the 1980 season.