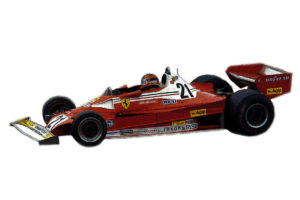 We started working on the new kit:
TMK 437 Ferrari 312 T2 GP Canada 1977
A very interesting subject because it reproduces the single-seater with which the Canadian driver Gilles Villeneuve made his Ferrari debut.
At the Canadian Grand Prix, Ferrari entered three cars at a grand prix: Lauda and Reutemann were joined by Gilles Villeneuve who was to join the Argentine in 1978.
Lauda, however, decided not to even perform the tests. Lauda stated that he did not feel capable of winning, even though Ferrari itself had declared that, if Lauda had not been satisfied with the car after the tests,
Villeneuve would not have been used in the race, to better assist the Austrian. Immediately afterwards, Lauda left Canada and returned to Austria. Unlucky race for the Canadian who retired due to an accident but still classified in 12th position.
His team-mate Carlos Reutemann instead had to retire due to a mechanical failure