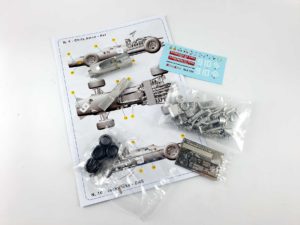 Another interesting version of the Ferrari 312 F1-68 which is added to the others already produced. This is the single-seater that was entered in the 1968 Canadian Grand Prix for drivers Chris Amon and Jacky Ickx. The Belgian did not take part in the race because he was injured during the tests following a serious accident. The characteristic of this F1-68 were the two additional petrol tanks applied to the sides of the engine and of the water pipe on the right side of the single-seater which started from the nose and reached the engine. Chris Amon, a New Zealander, has retired due to gearbox problems.