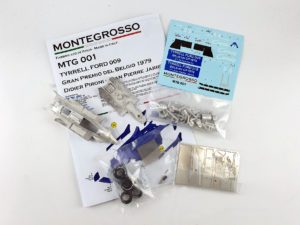 The new MONTEGROSSO kit is available

The Tyrrell Foord 009 deployed by the English team in the 1979 season was immediately struck by the extreme similarity with the Lotus 79 that had introduced the ground effect dominating the season. In fact it was a real copy made hoping to obtain sporting results of equivalent importance. Unfortunately for the Tyrrell the 1979 season was not full of satisfactions. Official drivers Didier Pironi and Jean Pierre Jarier only got places. This kit reproduces the version of the Belgian Grand Prix of 1979 with which the French Pironi conquered 3rd place and the only podium for him in 1979 while his team-mate Jarier finished the race only eleventh. Fully blue single-seater Tyrrell with the sponsorship of Candy who joined the English team as sponsor on the occasion of the Belgian Grand Prix.